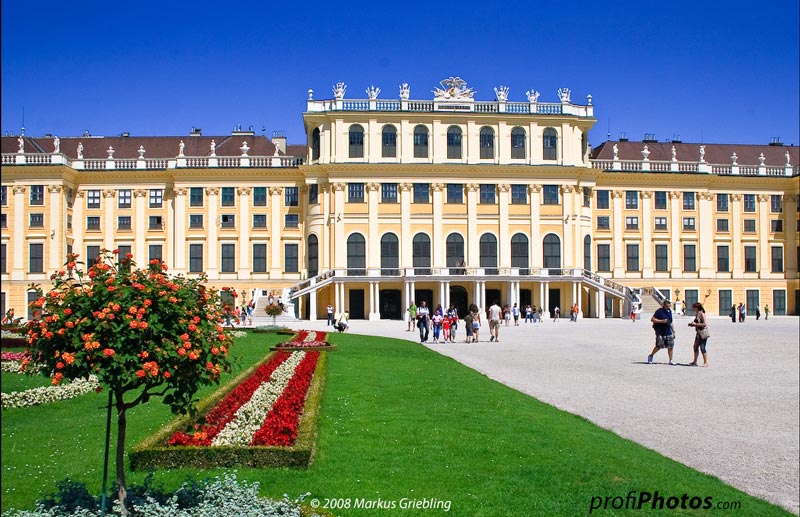 •
views
This palace has to be, one of the most beautiful and historically interesting attractions in Vienna, Austria. (For our Lightroom friends, we’re making all of the presets we used to develop the photos in this gallery, available for download – see below).
Markus Griebling

Our group spent the better part of a day at Schoenbrunn and still did not see everything. The tour inside the castle was interesting (although you’re not allowed to take photos) and caters to those that love historical information. If you want to immerse yourself in the lifestyle of the opulently wealthy from centuries past, this palace is for you. I remember looking at some of the paintings in the “summer residence” and couldn’t quite fathom how many servants they would have needed to cater a “small party” with a hundred guests. Simply put, the palace and surrounding gardens are huge.

The history of Schönbrunn, and the buildings that previously stood on the site, dates back to the Middle Ages. From the beginning of the 14th century, the whole estate was referred to as “the Katterburg” and belonged to the manor of the monastery at Klosterneuburg. In 1569 the estate came into Habsburg possession through Maximilian II, who was primarily interested in extending the game park. ( … much history passes … )

In 1830, Franz Joseph was born in the east wing of the palace and from infancy on, was groomed for his future role as emperor. Franz Joseph spent many of the summers of his childhood and youth at Schönbrunn. When he succeeded to the throne in 1848 the palace was once again to experience a brilliant epoch when he chose Schönbrunn as his primary residence. In 1854, in preparation for his impending marriage to Elisabeth, the Duchess of Bavaria, work had begun on adapting the apartments in the west wing for his future bride. It was this epoch of the palace’s history that was depicted in the ever popular 1950′s trilogy of films known as “Sissi”. 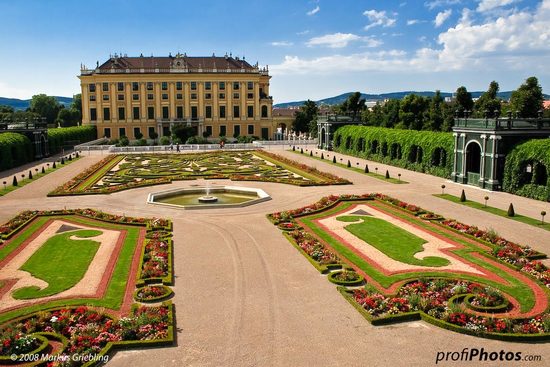 The Baroque layout of the gardens, together with the additions made during the last decade of Maria Theresa’s life, has survived more or less intact. The extensive park is articulated by a system of wide, stelliform avenues forming a symmetrical pattern on either side of the central axis of the palace. Extending from the garden façade of the palace to the Neptune Fountain at the foot of Schönbrunn Hill is the Great Parterre. The individual sections of the parterre are articulated by expanses of lawn and edged with flower beds.

The elaborate design for Schönbrunn Hill planned during Maria Theresa’s reign was abandoned, and zigzag paths were constructed leading up to the Gloriette, which forms an impressive termination to the central axis.

Fischer von Erlach’s designs had included a belvedere for Schönbrunn Hill intended as the crowning touch to the palatial Baroque ensemble, but it was not until Johann Ferdinand Hetzendorf von Hohenberg remodelled the park that this project was finally realized. The Early Classicistic colonnaded Gloriette was built to Hohenberg’s designs on the crest of the hill in 1775. The structure consists of a central section in the form of a triumphal arch, flanked by arcaded wings with lofty semi-circular arches. The central section is crowned with a mighty imperial eagle perching on a globe and surrounded by trophies. The flat roof with its retaining balustrade was already being used as a viewing platform by the beginning of the 19th century. It can be accessed today via a stairway. 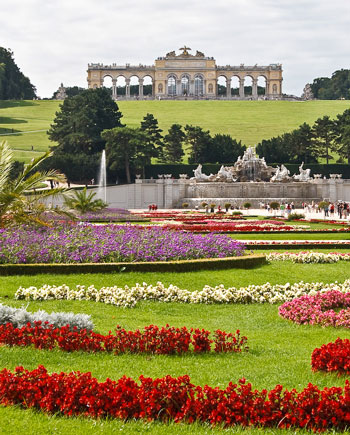 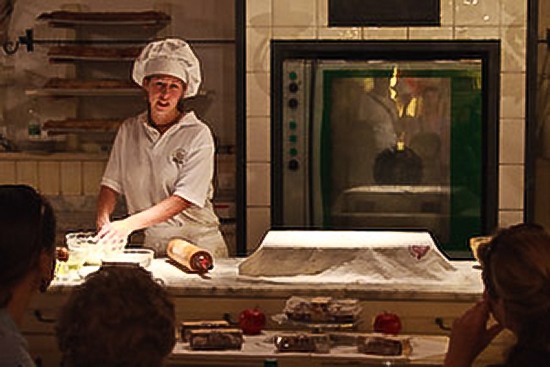 By the time we visited this show, near the end of our stay, I was pretty hungry. I thought great, a free sample of Apple Strudel. What a let down to receive a tiny bite-size morsel of Strudel! I was still hungry but watched the show anyway (standing room only). What amazed me was the technique demonstrated where they manage to get the dough so thin that you can read a newspaper through it. For those that want to try this at home they have a 24 hour WEB site service where you can go to for help.

I have only touched upon some of the places we visited with our “Classic Pass”. Had we wanted to spend more money we could have also visited the Zoo, Desert Experience, Palm House and Carriage Museum. It was an experience worth the cost of admission and naturally I have these photos as a memory of our time there.

As stated above, the presets that we used to “develop” our Palace photo gallery are being made available for download. The first set of presets, which we’re calling our Palace collection, includes the develop and camera raw settings we used with our Canon profile. A second set of presets is not camera specific and should be downloaded for those not using the Canon camera raw profiles.

I hope that you will find one or more of these develop presets useful. I'd love to hear your thoughts. (see comment form below)  Enjoy!